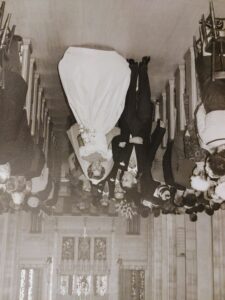 Who: Dorothy Pointing ’62 and Terry Keenleyside ’62

Where: The Trinity College Chapel, of course!

Who else was there: Then-Provost Reverend Derwyn Owen officiated. Patrick Gray ’62 was best man.

From the groom:
We met at Trinity in English 1A. Dot sat in the front row and being an excellent, conscientious student, took copious notes. I sat at the back with other students of indifferent calibre and commitment to their studies. I had noticed Dot from the first class. How could I not have, with her striking good looks combined with a serious demeanour? I thought, however, that she was beyond my reach, and when the date of the Athletic dance arrived that autumn, I accepted the offer of someone else, furnished by a sort of informal Trinity blind date network. But when I was told much to my surprise that Dot was also looking for a date, I cried, “Hey, change mine to her, please!”

That first date was not, however, a great success, as I learned from Dot much later. Apparently, she didn’t like the way I kissed her at her family’s doorstep at the end of the evening. So, when the Saint’s dance followed (for which women invited their dates), Dot asked someone else, and I was crushed. Still, we went on seeing each other at lectures. The following January, we both attended a class party at the Hart House Farm in Caledon. There, we even jived together on the farm’s kitchen table, and I sensed a change in Dot’s attitude towards me.

A few weeks later, I was passing outside the Porter’s Office when I spotted Dot, sitting in the corridor by the old entrance to the library. She looked cute as always in a blue wool ski sweater, slacks, and only socks on her feet. Bob Fisher, a fellow classmate and first-class swimmer, happened to walk by and offered us free tickets to a water polo match at Hart House the following Saturday evening. So, that was the exciting destination of our first unarranged date! Afterwards, we went to Fran’s Restaurant at Yonge and St. Clair for hamburgers and fries. “Are you having onions on yours?” Dot asked innocently (and I mistakenly thought slyly). “Why not?” I answered. So, we both did and later when I kissed her on her doorstep, she did not complain!

From that moment on, we were inseparable. We graduated in the spring of 1962 and were married that September, one of two couples in the class to meet at Trinity and marry, the other being Judy McManus and the late Burt Tait.

The provost, Reverend Derwyn Owen, officiated and his nephew, Patrick Gray, a fellow classmate, was best man. So, it was all very much a Trinity love story that resulted in 60 years of happy, adventurous years together—and still counting!

As published in the Living Trinity E-Newsletter April 2022.

Share your wedding memory
Since its official consecration in 1955, hundreds of weddings have taken place in the Trinity College Chapel. Was yours among them? To share your Trinity Chapel moment, send a photo of your wedding day along with a 150-word written account of your experience. Please provide a high-resolution scan of your image (350 dpi or greater, scanned at 100 per cent). Original photos may also be sent for scanning and will be returned. For more detailed submission guidelines, please send an email to magazine@trinity.utoronto.ca.