Entering the College through the grand doors at 6 Hoskin Avenue feels the same as always—until you step inside. There’s a new welcome desk, for starters. Turn left and you’re greeted by the Student Services Centre, a bright, airy space that now houses the Office of the Dean of Students and the Office of the Registrar. The integration of these student services into one space has been “transformative,” says Trinity Registrar Nelson De Melo. 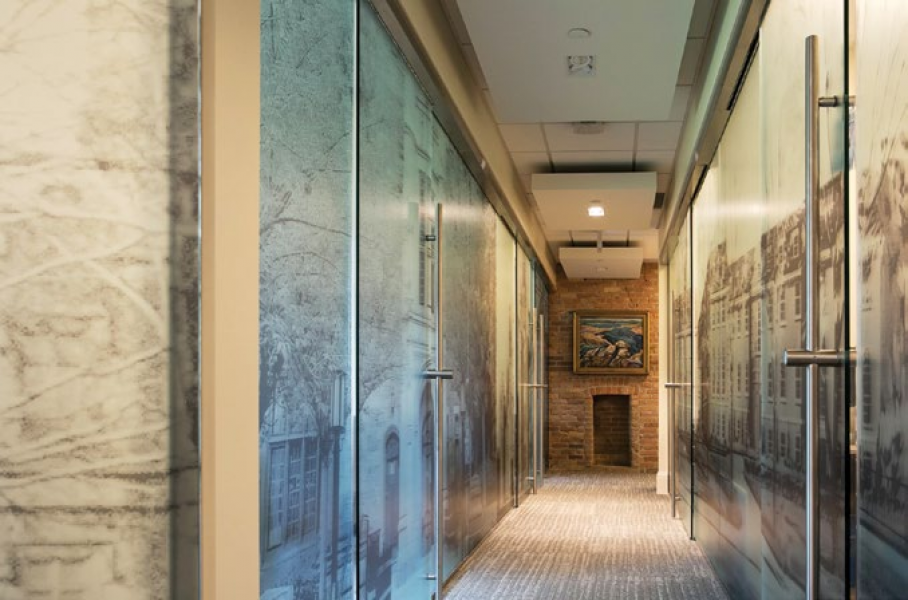 archival images were applied to the Centre's glass walls 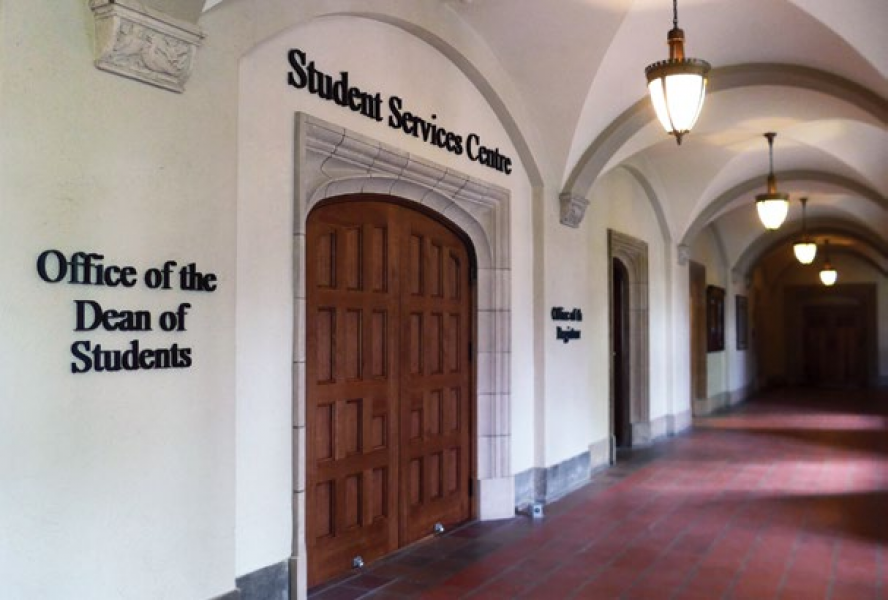 centrally located on the ground floor of the Hoskin Avenue building, the new one- stop shop is easy for students to find 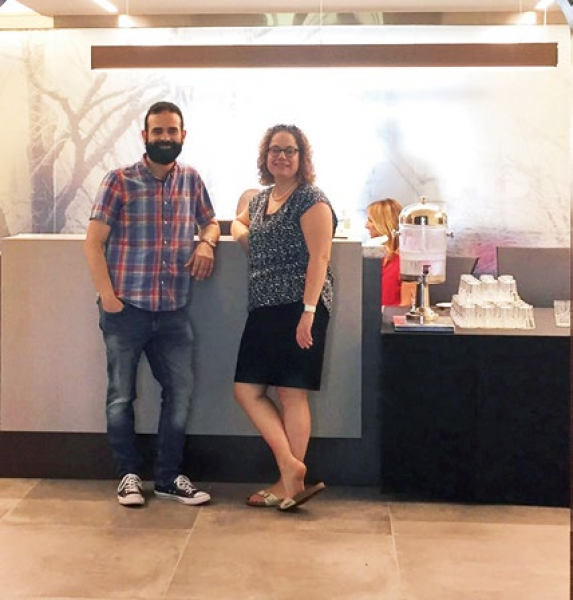 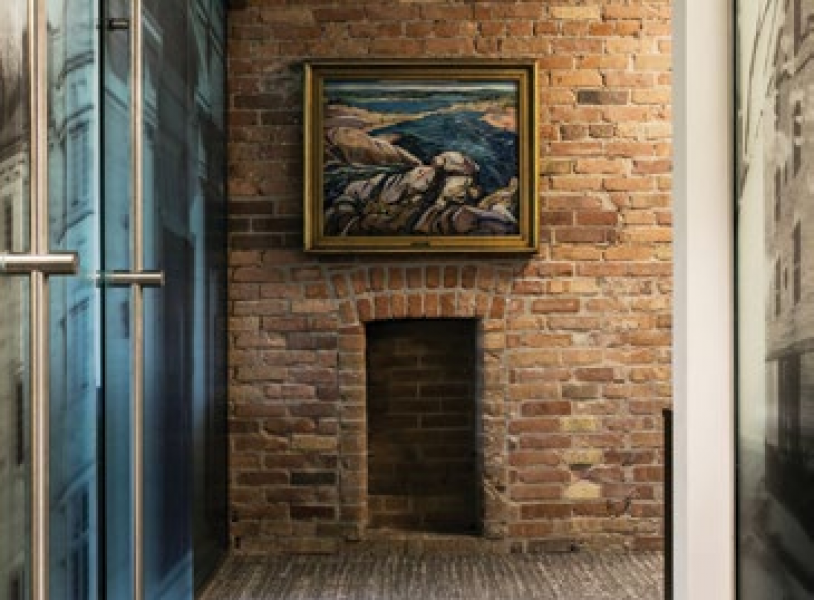 An old fireplace, discovered during the renovations, was uncovered and restored

Get involved in two oral history projects underway at the College

Rainbow Trinity, a social support group for students of marginalized sexual and romantic orientations, gender identities, gender expressions, and intersex students, is compiling a student- driven oral LGBTQ history in celebration of the upcoming 50th anniversary of the decriminalization of homosexuality.They are inviting LGBTQ Trinity College alumni, faculty, and staff to share their experiences of inclusion, exclusion, activism, family and community at the College. Audio recorded in these interviews will be placed in the Trinity College Archives and used for scholarly research. Interviews will be held at Trinity College and can be anonymized at the interviewee’s request. For more information or to volunteer, please contact elise. lafleur@mail.utoronto.ca.

The project will become a supportive resource that benefits the development of a multicultural college environment. Trinity alumni who are members of the Ethnic Chinese group or have a story they would like to share about Chinese alumni at Trinity are encouraged to contact Yiran (Katherine) Li at yirankathli@ gmail.com. Interviews may take place in person or online, in English, Cantonese or Mandarin. If you fear the printed word is in danger of extinction, look no further than Trinity’s annual Friends of the Library Book Sale for evidence to the contrary. Ardent fans lined up on October 24 to hear Provost Mayo Moran ring the bell at 11 a.m., officially kicking off the 44th year of the five-day event. It takes a dedicated army of volunteers the better part of a year to receive and sort thousands of titles into more than 70 categories ranging from literature and rare books to cookbooks and sheet music. Each year the book sale raises more than $120,000 to support many projects and activities of the John W. Graham Library. To donate books or volunteer to help with next year’s sale, contact the Friends of the Library at 416-978-6750 or fotl@trinity.utoronto.ca.

Trinity has selected Mecanoo Architecten from the Netherlands in partnership with Toronto firm RDH Architects Inc. (RDHA) to design and build the College’s new student residence and academic building.

Mecanoo is the design architect, led by Francine Houben, who is world- renowned for her deep understanding of design and the ways in which people inhabit space. She is an advocate for the way architecture can support community and the needs of users—an approach that aligns perfectly with Trinity’s values.

RDHA’s Bob Goyeche is the project architect. Both firms are award-winners and are experienced in blending historic and contemporary architecture.

They employ an integrated “live, play and work model” into every design, and incorporate sustainability and connectivity into all aspects of their projects.

News from the Faculty of Divinity It is always encouraging to experience the quality of the new students who join the Faculty of Divinity each year, and to witness the talents and dedication they bring with them. Along with their energy, I am also excited by new program initiatives being undertaken in Divinity. With a workshop focused on supporting Youth Ministry Leaders and a new course called “Renewing Catechesis and Discipleship,” we are increasingly strengthening our curriculum’s commitment to preparing leaders for the emerging forms of church and ministry. We are currently enjoying the second year of a course on Anglican Liturgy that is offered jointly with Wycliffe College. Some of our current first-year students report that this is their favourite course this semester, so I am pleased that this partnership is bearing fruit.

Next semester, I am very much looking forward to launching Divinity’s new contribution to the University’s undergraduate First-Year Foundations seminar. My course “Disaster and Terrorism: Religion and Ethics at Ground Zero” begins after Christmas, and appears to have a full enrolment. I very much enjoy discussing pressing contemporary challenges with first-year students, who bring a lot of energy and engagement to such conversations. Finally, I am encouraged by the launch of the Living Trinity campaign. This initiative includes funding objectives for programming in Divinity, but it is also significant that the new residence space will be better able to accommodate more mature students such as those who study Divinity. The future looks bright for Divinity at Trinity!

News from the Faculty of Arts and Science It is an exciting time to be Acting Dean of Arts and Science at Trinity: The Integrated Sustainability Initiative, spearheaded by Provost Moran, involves academic innovations and opportunities that put Trinity at the forefront of research and teaching about climate change and sustainability at the University.

We already offer the Butterfield Environment & Sustainability Stream in the Margaret MacMillan Trinity One program, but we have now designed courses on sustainability for each of our upper-level programs—International
Relations; Ethics, Society and Law; and Immunology. That means all students in these popular programs will be exposed to the fundamental issues surrounding sustainability and encouraged to consider solutions for the future.

Complementary to these courses will be co-curricular and extra-curricular activities including symposiums, guest speakers, visits to agricultural sites and other institutions dedicated to sustainability practices, and a farm-to-table program for teaching and research about food resources and management.

Another element of these initiatives has been to consider the academic needs of the new building in terms of classrooms and public spaces that maximize the potential for all of these activities and their integration into student life on campus. Combined with the regular duties of the Dean’s office in ensuring Trinity’s customary high standards in academics, it has been incredibly rewarding to serve as Dean of Arts, and I’m grateful for the privilege of working with such fantastic faculty and staff whose dedication to the College and its students is truly inspiring.

At the Trinity College Spring Meeting of Corporation, Professor Mayo Moran was reappointed for a second four-year term as Provost and Vice-Chancellor of Trinity College, and Chancellor William C. Graham’s current third term was extended until April 30, 2020. On September 4, Trinity formally welcomed and admitted incoming students to the College at Matriculation Convocation. The College also conferred a Doctor of Sacred Letters upon Rosemary McCarney ’75 and an Honorary Fellowship upon Derek Allen ’69. Prof. Allen served as Trinity’s Dean of Arts and was responsible for the growth of the College’s excellent academic programs.

McCarney is a distinguished diplomat and author who just stepped down as Canada’s Ambassador and Permanent Representative to the United Nations and the Conference on Disarmament.

From Secret Space to Campus Cornerstone 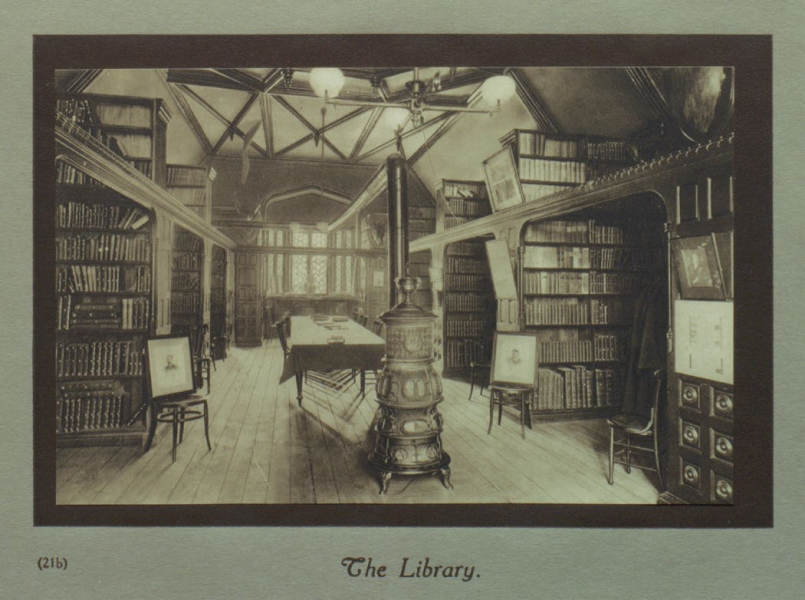 The library at “Old Trinity” on Queen Street West 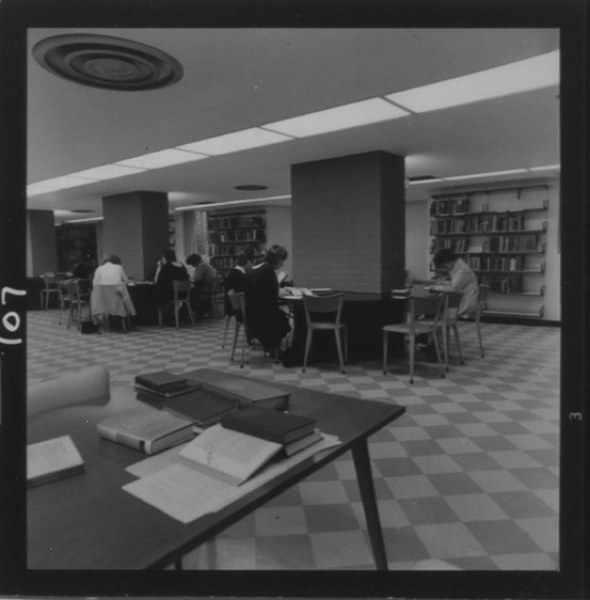 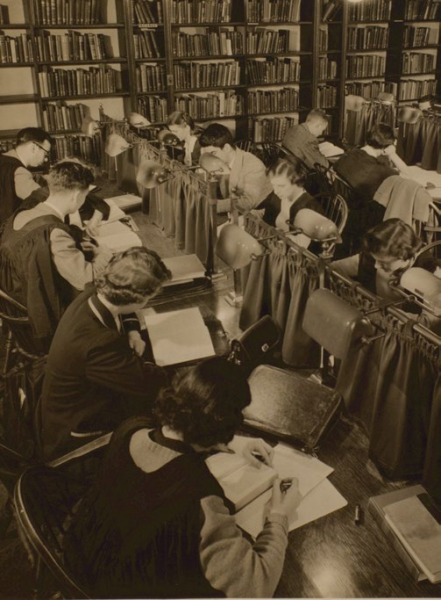 Not once but twice in Trinity history, the need for a chapel superseded the plans for a library. Between 1852, when the College opened, and 1884, the room built as the library directly over the main entrance of the Queen Street campus, with a view over the trees to the lake, was used instead as a chapel space. In 1880 Rouge et Noir (precursor to The Trinity University Review), a student gave this account of the library: “To a visitor, its existence is a secret; to the students, it is known as the Provost’s lecture room. Even the latter have a very restricted access to its shelves. There appears to be no known librarian, no recognized source of procuring admittance…” From 1884 to 1925, the cozy room with a fire burning looked like a most satisfactory place to study but still had no librarian to staff it. In fact, a contemporary account states that “The Library, which should have afforded a safe retreat, was quite inefficient and disorganized, and open less than an hour a day.”

If providing an appropriate room wasn’t a priority at the early College, collecting books was. The books originally given to King’s College (later the University of Toronto) by the Society for the Promotion of Christian Knowledge (SPCK) were retrieved from that institution after it secularized and installed at Trinity. The first Calendar of the University of Trinity College,Toronto, published in 1853, doesn’t mention the library, but the second Calendar in 1854 devotes half a page, boasting of the library’s 2,000 volumes, of which 600 were a gift from the SPCK. Subsequent issues report on the ever-expanding collection: 2,900 volumes in 1856, 3,100 volumes in 1857,3,400 volumes by 1859. John Strachan gave 300 volumes of theology, classics and general literature. Oxford granted the new university books published at their press, as did Trinity College in Dublin. Columbia College, the Smithsonian Institute and the State of New York also donated books. The 1884-85 Calendar claims 5,000 volumes, listing gifts that included 46 volumes from E. B. Pusey, the Oxford scholar, and the books from Strachan’s estate. In this year the library was “open during Term, for the use of Graduates and Undergraduates, every Wednesday and Saturday, from 12 to 1 p.m., when the Librarian will issue books. All books must be returned to the Library on or before the last day of Term. A fine of 50 cents for every folio or quarto volume, and 25 cents for every octavo volume, not so returned must be paid; the fine to be repeated weekly until the volume be returned.”

Over the years, the “Library” entry in the calendars grew to several pages, with extensive lists of gifts from individuals and institutions itemized, and lists of books purchased. In 1881 the By-laws of Trinity College stipulated that a resident professor should be appointed by the Corporation as Librarian. The 1883-84 calendar is the first to refer to this position; prior to this, the Provost had assumed the role, with limited success as we see above. Presumably he had a number of other things to do.

By 1903 the residency rule was withdrawn. The first person named as librarian was The Rev. Prof. J.C. Roper, MA, professor of Divinity, who, with two assistants drawn from the Jubilee Scholars, managed a collection of 6,600 volumes. The role of librarian rotated through the teaching staff (it wasn’t until 1961 that a professional librarian was hired). In 1891 serials make an appearance, on a wide range of topics, including Anglican Church publications of course, but also the sciences, music and history. In that year the collection topped 10,000 volumes.

By the time Trinity moved to Hoskin Avenue in 1925, the library received scant attention in the College calendars. Perhaps this was because the gracious room meant to house the library—we know it as Seeley Hall—with those solemn stone faces gazing down to spur intellectual accomplishment, was repurposed as the College Chapel, and the library occupied an office in the main corridor. After the building of the Chapel in 1955, stacks were created under the new structure. In 1969-70, the basement presence was expanded. Many alumni of the College will remember that iteration. The library waited not only for a Chapel, but until residences, a dining hall and common rooms were established, a building for St. Hilda’s constructed, the quad closed, a new academic building installed, and a theatre built. Nineteen years ago this fall the John W. Graham Library opened, on October 5, 2000, taking its place among the iconic spaces of Trinity College. And today’s library offers a host of services beyond the stacks. From personal librarian support to laptop loans, the Graham Library has become a core part of the student experience.